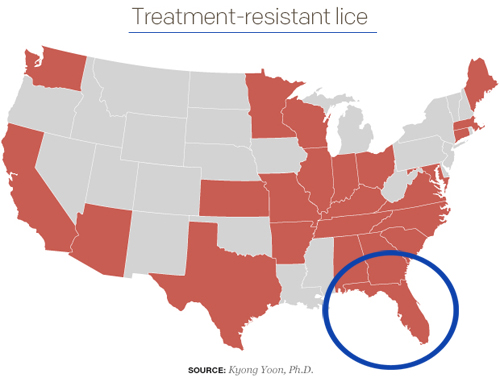 We at The Lice Boutique™ were interested by the big announcement about “Super Lice” when it hit the national news in the Fall of 2015. From experience, we know to take sensational announcements in the news less seriously than we did 30 or 40 years ago.

But super lice hit more than just the news – It was everywhere for about two weeks! Each morning show had at least one segment per day on these new resistant super lice! It has been educational for us to watch and re-learn how frightening a topic head lice are for so many moms throughout the United States.

The idea that lice are now resistant to the over-the-counter medications that have been sold for 50 years seems to be an overnight sensation and it’s really frightening for lots of people.

Here is what we think about Super Lice:

The over-the-counter medications used to kill lice for decades have simply become less effective in treating head lice. Darwin wrote an essay about adaptation in species and survival of the fittest. Super lice are simply a strain of lice that has adapted to survive pesticide treatments better than the lice of our grandparents.

The concept of adaptation can easily be related to how many antibiotics that were used to treat medical conditions 50 years ago in human beings, are not as effective today. This example has happened relatively quickly when you consider the life expectancy of Americans to be near 80 years. If you realize that head lice only live 30 days it’s not hard to imagine how many hundreds of generations of lice were treated with the same toxic chemicals. Not surprisingly, today’s head lice have become resistant as well.

There was a term coined about 20 years ago by an author named Steven Covey – he called it “The Law of the Farm.” The concept is simply that some things take time and follow universal rules to happen. On the farm if you plant a seed, then fertilize and water properly, after some period of time you will have the desired plant. You cant plant that same seed today, water faster and put more fertilizer on the ground and have the same plant in less time. Some things follow a process that is tried and true.

Head lice removal seems to be one of those laws of the farm. The term “Nit Picking” has been around a long time and it is used to describe someone who is very particular about doing something in a meticulous fashion. Head lice removal of any kind needs to include great “Nit Picking,” and in this case it is literal! No matter what strain of lice and no matter how the live lice bugs are killed, all of the nits in a head of hair have to be removed for the outbreak to be finished.

The Lice Boutique™ has “Super Powers” over Super Lice and we use them everyday! It is called Strand-by-Strand lice and nit removal. That’s what we do all day, every day. Call us today for dominance over Super Lice.